2 points to be noted

There is ample evidence this book (ie Tazkirrah ur-Rashid) was published in Rashid Ahmad Gangohis lifetime, so he saw it, read it and might have even checked it. Although this is not exactly certain as there is no publication date on the book and neither does the intro indicate anything.

Secondly some deobandi quarters and “innocent sympathisers” may argue that Rashid Ahmad Gangohi never actually wrote this. So we answer and say this is not problematic from a number of angles. The first being his close students, murids, disciples and sympathisers compiled and penned the book and they were aware of his Aqidah and what it conformed to ie essentially what his aqidah was. secondly, these compilers are the pillars of the deobandi sect themselves and hold enormous weight so this is detrimental in itself. Thirdly this book is his memoirs ie his thoughts, what he presented to the people, how the people saw him and in what light and his general teachings. At the very least we should understand and hold this as a deobandi aqidah.

So what do they say, and it indeed this type of belief and aqidah sends shivers up the spine. In the same token let this be a reminder to the deobandi sympathisers, when will you stop defending such anti Islam and idolatrous aqidah 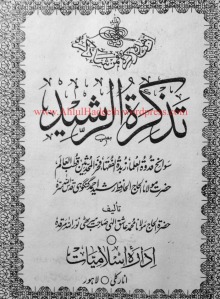 “during the era his opposers (ie Rashid Ahmad Gangohis) were causing commotion concerning the issue of Imkaan al-Kadhib (the possibility of Allaah lying) and issued a legal edict of his takfir. In a gathering of Sian (a reverend saint) Tawakul Shah Anbalwi a moulvi mentioned the divine and holy Imams name and said he believed that Allaah could lie. On hearing this Sian Tawakul Shah lowered his head an began to meditate (in a trance) for a while and then lifted his head and said  in punjabi, “What are you people saying!!! I am seeing the pen of Maulana Rashid Ahmad (Gangohi) writing above and beyond the (Allaahs) Arsh .” (Tazkirah ut-Rashid (2/322) (this was the outcome of his meditation)

One begs to ask, what was Mr Gangohi Rashid Ahmads pen doing there? What is this notion implying? We know Allaah Jallo Wa A’la rises above his throne but here we find Mr Gangohis pen. This jahmi aqidah is despicable as on one hand they claim they make ta’weel of the sifaat and here they are claiming elements divinity and this wont be the first time they have done this.

Does it not suggest that Mr Gangohis pen is traversing above the Throne is meddling with core elements of divinity. We have not even begun the address the seriously grave mistakes in aqidah in this passage. Mr Sian Shah knowing the unseen and meditating. There is also a staunch and horrid smell of infallibility lurking in this passage.

This is the dangerous aqidah  of the deobandis we warn the people about. What was Khalil Ahmad Saharanpuri doing during his annotation and was Ashiq Ilahi Meerthi day dreaming when he was writing this. Where is the basic element of Eemaan and Tawheed here. So please all of those who are giving the deobandis excuses, lets us all save ourselves first. This is a clear Jahmi aqidah. They also accuse us of all sorts from anthropomorphism and from the mushabihah etc but here Rashid Ahmad Gangohis QALAM is above the throne. I mean how do we take this, are they saying Mr Gangohis qalam is the law, are they say Mr Gangohi is a deity that he writes everything. Was Mr Sian Shah saying that as Mr Gangohis pen is writing how can Allaah lie because he is……