This surely isn’t Islam and this is not taught to us by the Prophet sal Allahu aleyhi wasllam. One of the virtuous acts in Islam and the virtues are such tremendous and great in number but see how this is act is being ruined. Once there was one of our brothers who just asked a Deobandi brother how it is to perform Wudu the other way around? (as mentioned in Bahishti Zevar). The Deobandi brother gave an emotional answer that “This is the Wudoo of Shias”. The Deobandi brother didn’t knew that Ashraf Ali Thanvi had the same reverse procedure of Wudoo in his book. Khair, Allaah completed His Deen 1400 years back and One of The Crucial Criterias of Allaah accepting our A’maal is that it has to be accordance to the Sunnah. If its not in accordance to the Sunnah then no matter how sugar coated the act looks like, Allaah does not accept it. This reverse method is no where in the deen of Allaah and this is an innovation in the deen of Allaah. The Prophet s.a.w said:

“…every innovation is misguidance and all misguidance is in the Hellfire.” Sunan an-Nasaa’ee (1/224)

Recipe for Zina from Deoband

Now we take the following from this ruling of molana ashraf ali thanvi in bahishti zevar:

1) A person has intercourse with Some one else’s wife. This is called Zina in any language but this book ‘Bahishti Zevar’ says it should not be called Zina.

2) He will have to give her Mahr ul mithl as well which is a part of Nikaah.

3) The child that is born with this zina shall not be called Haraami (Bastard).

4) Then when the man realises (“Aray ye tu meri biwi nahi hai/Oh she isnt my wife”), then he should stop having intercourse with her and leave her.

5) The woman however must now observe Iddah and she cannot go back to her husband without the Iddah after having done zina.

How on earth can some one having intercourse with some one’s wife not be termed as Zina? How on earth is Mahrul Mithl applicable and given to the one that u had zina with? And how on earth is that child born not illegitimate? What shall i call this….? I cant help but call this a recipe for Zina. What was the woman doing all this time? Was she mistaken as well?

Insults to the Quran

Before I comment on this, please let me tell you that the subject here is not whether one can use  a taweez or not. Now coming to the point, I tried alot to find the translation of this part from bahishti Zevar in its english translation but i failed and couldnt find it any where. I have nothing to say about the taweez being written on the left thigh of a woman but I ask my brothers and sisters that adhere to this book to please help me increase my knowledge for the sake of Allaah and tell me if its alright to tie quranic aayah on thighs of women. Allah has given us thighs that is very very near the private parts. Is there Any Quranic aayah, any sahi hadeeth or any saying of Imam Abu Hanifa rahimahullah to justify this? This book is supposed to be one of the top books on hanafi fiqh according to deobandis.

I will appreciate your time and effort to help me find any proof for the justification of this Insult to the Quran.

May Allaah keep us united on the path of Quran and Sunnah and may Allah open up our pathways as we strive in his cause to spread Islam. Ameen.

If I said anything correct, then it is from Allaah (subhanahu wa taa’ala), and if I erred, then that is from me and shaytan.

The Prophet s.a.w taught us to say “Bismillah” before Wudhoo, there is no Dua during the Wudhoo, thereafter when one has completed doing Wudhoo he must say:

There is no such thing as Reciting Surah Al Qadr or reciting bismillah and Kalima upon washing each and every part during wudhoo. Molana Ashraf Ali thanvi says in the same bahishti zevar part 1, Aqeedo ka bayaan, Masla no.22 that:

“Allah and his messenger sal Allahu alyhi wasallam HAVE SHOWN ALL MATTERS PERTAINING TO DEEN IN QURAN AND HADITH. To bring something new into the deen is not permitted. Such new things are known as Bid’aat (Innovations). An Innovation is a major sin.”

We dont find any proof of this act from Quran or hadeeth and hence this act is an innovation. The Prophet s.a.w said: “…every innovation is misguidance and all misguidance is in the Hellfire.” Sunan an-Nasaa’ee (1/224).

If deobandi brothers try to justify this then they have no right to condem Barelwis for their innovations nor do deobandis have the right to do long talks against innovations. Allaah knows best. May Allah guide us all and may Allah protect us from every kinds of innovations (Bid’aat) in Islam. May Allaah keep us united on the path of Quran and Sunnah and may Allah open up our pathways as we strive in his cause to spread Islam. Ameen. If I said anything correct, then it is from Allaah (subhanahu wa taa’ala), and if I erred, then that is from me and shaytan.Ameen.

Alot of our beloved brothers and dear sisters have made 4 rakaat sunnah before Isha as a part of Deen and they call it Sunnah or rather Sunnat Ghair Muwakkada. We know that Sunnat Ghair muwakkada is the sunnah which the prophet s.a.w didnt do regularly. That means if these 4 rakaat are Sunnat Ghair Muwakkada then Surely there should be just one proof atleast to show that the prophet sal Allahu alyhi wasallam prayed these 4 rakaat but wallahi there is not a single hadeeth with Sahi or Hasan chain which even indicates that the prophet sal Allahu alyhi wasallam offered 4 rakaat sunnah before Isha fard.

Rough translation: “After alot of hard work, I could not find any hadeeth in the hadeeth books which mentions 4 rakaah before Isha”

Then on Page 116 he has written that:

Rough translation: “The hanafi books are filled with the mention of 4 rakaat before Isha so May be there is proof for it in the books that are “Aimatnal Makhtoota” or the books that have been wasted.”

Im unable to translate Aimatnal makhtoota for now so please pardon me.

Mufti taqi usmani tried to justify these 4 rakaat with a proof of his but Alhamdulillah at the end he make it clear that the prophet s.a.w didnt determine these rakaat and thats my whole point. He says at the end of his fatwa that:

“However, it should be borne in mind that these 4 rak’ats should not be taken as determined by Nabi (Sallallahu Alaihi Wasallam), nor as a specific Sunnah.”

With this statement he has basically dismissed the position of nearly all of the hanafi fiqh which holds the view that the prophet s.a.w prayed 4 rakaat sunnah ghair muwakkada.However, I do have doubts over his attempt to justify this 4 rakaat with the hadeeth of Sahi Al Bukhari. The link provided says:“On the basis of this Hadith, Muslim Jurists have inferred that it is mustahab (desirable) to perform some prayer, nafl or sunnah, before every obligatory prayer, except before Maghrib, according to the Hanafi Mazhab.”

You can see how he added the exception before maghrib. The hadeeth of Sahi Al Bukhari which mufti Taqi Usmani used is narrated by Abdullah bin Mughaffal Al-Muzani. Now the same Sahabi narrates another similar hadeeth which is mentioned in Sahi Al Bukhari.

Chapter: The (optional) Salat (prayer) before the (compulsory) Maghrib prayers, Hadeeth# 1183Narrated ‘Abdullãh Al-Muzani:The Prophet , said, “Perform (an optional) Salat (prayer) before the (compulsory) Maghrib prayers.” He (repeated it thrice) and the third time, he said, “Whoever wants to offer it, can do so,” lest the people should take it as a Sunnah.The exact same sahabi makes it clear that there is a nafal prayer before maghrib salah and he did not give any exception to maghrib Salaah but mufti taqi usmani used a hadeeth narrated by the exact same sahabi and gives an exception to the maghrib salaah.  Its like Justifying something that has no proof any where and leaving out something that has proof from the same proof that one has presented. The nafal before maghrib salaah has its daleel and the 4 rakaat Sunnat ghair muwakkada has no daleel. There is no exception for maghrib salaah in this hadeeth at all and the daleel provided by him applies to the nafal before maghrib salaah as well. It does not have any exception for maghrib salaah either which negates the majority of the position of hanafi fiqh. Allaah knows best.

However my brothers and sisters, if im wrong then i need to be corrected on this issue with proofs from Quran and Sunnah but if im right then it is the right of truth and the right of your own nafs to accept the truth. May Allaah keep us united on the path of Quran and Sunnah and may Allah open up our pathways as we strive in his cause to spread Islam. Ameen.
If I said anything correct, then it is from Allaah (subhanahu wa taa’ala), and if I erred, then that is from me and shaytan.

Writing Dua on Kafan With Fingers on Chest & Forehead 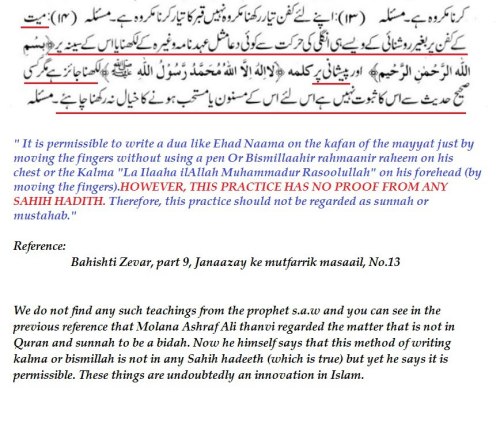 If In Doubt During Wudu Wash Left Foot

The Sunnah Method of Janazah According To Deobandis